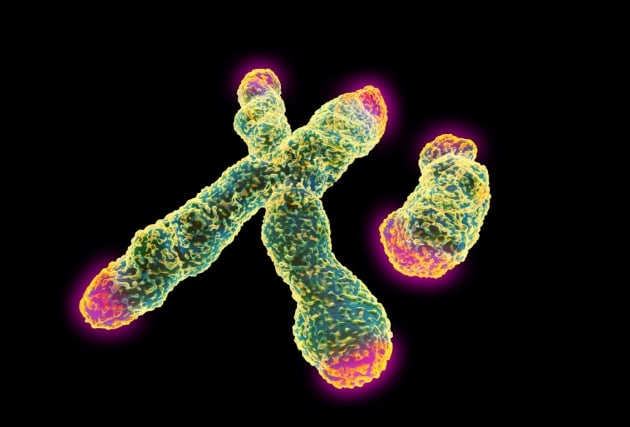 In a study published by Daniel Notterman and colleagues in the Proceedings of the National Academy of Sciences (http://www.pnas.org/content/early/2014/04/02/1404293111), the DNA of 40 nine year old Africa-American boys was examined in relation to their upbringing. Factors including household income, family stability, maternal health and education and the strictness of parenting were considered when determining how “disadvantaged” the household was. It was found that  children who were raised in disadvantaged environments had telomeres that were 40% shorter than those who did not. So, what are telomeres?

Telomeres are like the plastic tips on shoelaces. They are protective regions of non-coding DNA that cap the ends of chromosomes to prevent the loss of protein-coding DNA when cells divide. When they get too short, a cells structural integrity weakens and it can no longer divide and dies. A such, their natural shortening with age is associated with a wrath of diseases in adulthood from diabetes to dementia and cancer. Telomeres are thus regarded as biomarkers of stress. Interestingly, in this study, the most sensitive children living in distressing environments had shorter telomeres whereas placing sensitive children in nurturing environments lengthened their telomeres. This begs the question- could ones health be improved simply by lengthen their telomeres?

In a 5-year controlled trial carried out at the Preventive Medicine Research Institute in San Fransisco (http://www.thelancet.com/journals/lanonc/article/PIIS1470-2045%2813%2970366-8/fulltext), researchers followed men with early-stage prostrate cancer and examined lifestyle effects on their telomere lengths. A number of these participants were actively engaged in certain lifestyle changes including diet and exercise, as illustrated below. 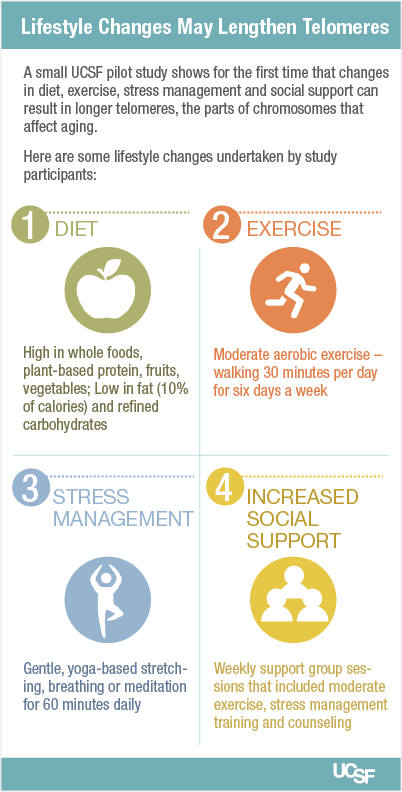 Interestingly, men who made these lifestyle changes experienced significantly longer telomeres at the end of the study. In fact, the more people changed their behavior and adhered to the changes, the longer their telomere lengths. These men also exhibited increased telomerase activity, the enzyme responsible for repairing and lengthening telomeres. “This was a breakthrough finding that needs to be confirmed by larger studies,” said co-senior author Peter R. Carroll, MD, MPH, professor and chair of the UCSF Department of Urology.

Therefore, a persons genetic material is not the only determinant of telomere length and longevity. Environmental factors, such as obesity, smoking and emotional stress can prematurely shorten telomere length.

Apart from the fascination in increasing telomere length with increasing healthy lifestyle, there is something troubling….

Not only do healthy cells have longer telomeres, but cancer cells do too! It’s thought that this may actually help them keep dividing and prevent them from dying. So far, these concerns have not deterred some companies from perusing drugs than can lengthen your telomeres.  New York-based T.A. Sciences manufactures a supplement in a pill form that has been lab tested and shown to stop telomeres from shortening, in hopes of halting the aging process. The product, TA-65, comes from extracts of the Chinese herb astragalus, which has been used for medicinal purposes for more than 1,000 years, says Noel Patton, chief executive officer of the company. Perhaps, worryingly though, TA-65 requires no approval from the U.S. Food and Drug Administration because it is marketed as a supplement and not a drug. The pill brings in an annual revenue of US$6 million in the United States alone. Nonetheless, a lawsuit challenges it’s anti-aging claims (http://www.nature.com/news/lawsuit-challenges-anti-ageing-claims-1.11090)